a few words about dr. mike

A leading practitioner in stem cell therapy, Dr. Mike Hutchinson, D.V.M., is a highly sought after speaker at national and international veterinary conferences on the uses of animal stem cells.

Dr. Mike has performed more than 1000 Adipose-Derived Stem Cell procedures on dogs, cats, horses, camels and a bird, among his 20,000 surgeries in 31 years of practicing veterinary medicine.

Shortly after the terrorism attacks of 9/11, Dr. Mike was trained in the economic consequences of bioterrorism and agro-terrorism through funding from the Centers for Disease Control and Prevention. He also has co-authored a study on Serotypes of Bovine Astrovirus, published in the Journal of Clinical Microbiology.

at the forefront of stem cell technologies

Owner of Animal General of Cranberry and Chairman of the Board of VivaTech International, Dr. Mike is married and the father of five children.

Honorary Position on the Board of Directors 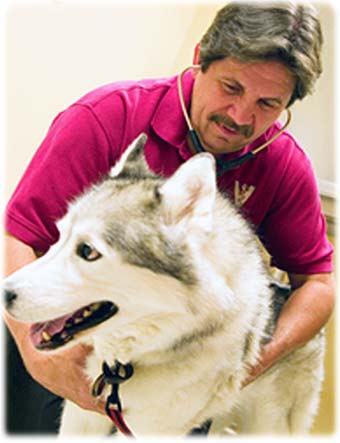 A veteran of more than 250 media interviews, Dr. Mike is a regular guest veterinarian on KDKA-TV’s “Pittsburgh Today Live.” He recently concluded his the weekly guest host of “Animal General with Dr. Mike” on powerhouse radio station KDKA-AM. In 2009, he was presented with the “Rising Star Award” from the Veterinary News Network.

For volunteering his time and experience, Dr. Mike has received numerous awards from breed clubs, the Cat Fanciers’ Association and Pioneers for Animal Welfare Society (PAWS). He was named to an honorary position on the Board of Directors of the prestigious Theodore Roosevelt Sanctuary for his work with wildlife and received a distinguished service award for 12 years (1986-1998) as veterinarian for the Nassau County, New York Mounted Police Force.

Dr. Mike graduated from the Pennsylvania State University in 1981 with a degree in Animal Bioscience, and earned his D.V.M. degree from the Iowa State University School of Veterinary Medicine in 1986. Owner of Animal General of Cranberry, near Pittsburgh, he is married and the father of five children.

dr. mike hutchinson is chairman of the board at vivatech international, using regenerative medicine to treat humans

VivaTech is a Pennsylvania-registered Corporation that licenses proprietary technology utilizing ultrasound cavitation to extract the adipose-StroMed cells with extra-cellular matrix from adipose tissue. Unlike other methods of stem cell therapy, the major advantages of using this patented technology is the ease and speed of processing (minutes instead of hours) and most importantly, NO USE OF ENZYMES or chemicals.

VivaTech International Inc. is the Sponsor of IRB (Institutional Review Board – of the Institute of Regenerative and Cellular Medicine) approved Clinical Trials for Osteoarthritis of the Knee, Hip and Shoulder.

VivaTech International Incorporated is a Pennsylvania based Corporation founded on February 12, 2015.

VivaTech has exclusive rights to license Cell-Innovations (Australian company) medical protocol in the U.S. This protocol was developed and implemented in Australia by Dr. Wayne Thomas. This procedure is allowed by Australia’s TGA (Therapeutic Goods Administration).

Over 1,500 patients have been treated in Australia by Cell-Innovations using Dr. Thomas’s technology with greater than 82% of the patients reporting a major improvement in reducing pain, with evidence of cartilage regrowth.

Watch this short video to gain an understanding of VivaTech’s Stem Cell Procedure.

Stem Cell Transplant Used To Heal Local Woman & Her Own Dog. You can also view this story on CBS Pittsburgh.